Get in my way: Football 2

The last football came we shot, only one person really got in my way.

This week, all the action photographers were great! It was during the halftime awards presentation to our alumni that this guy decided that HIS pictures were way more important than the six other photographers trying to get the same picture. 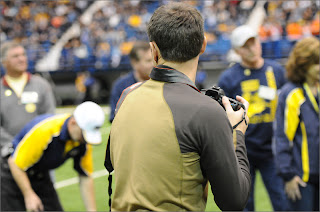 The Offender
Shame on you sir.

Let me break it down for you.

There was a whole line of alumni out getting awards for being awesome or something. A bunch of photographers, students and professionals alike, are out on the field trying to get the shots we need.

This guy is shooting a seriously wide zoom lens. Rather than stand back and zoom in like the rest of us, he goes wide and stands 3 feet from the presenters. Great. Now I've got his ass in my shot instead of the plaque and the handshake.

To his credit, he realized he was presenting his own ass as a fair sized target to the rest of the photographers and he would move after he got his shots... Until the next presentation, at which point he was right up in their face and in our shots.

I got fed up and yelled something to the effect of: "Stand back! The rest of us are taking pictures too."
I'm not sure if he heard me, but the other photographers did. You know, the ones exhibiting basic courtesy.


Several of the photogs out on the field now know that I make blog posts out of offenders like this. One of them looked at me while photographing The Offender's rear end and asked, "he gonna be on the blog?"
I said "Damn right he is."

Let me repeat the lesson from our last GIMY post:

Enough of my bitching. The moral of the story: be courteous to your fellow photographers. If you don't, you might end up the subject of a long-winded blog post about how rude it is to get in other people's shots.