I decided to be pissed for a change, just to see what it looks like. 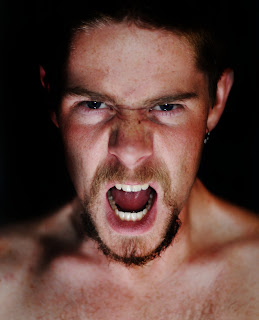 And I like the way it turned out. This is a side of me that very few people have ever seen (most of them are family members). Now you, my faithful readers, know what I look like when I'm pissed.

Tech stuff: I used a really fun light modifier to do this. It's a Tupperware container lined with paper, with a square hole cut in the back for my SB600. 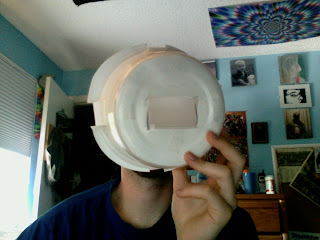 It diffuses light exactly the same in all directions, so it doesn't matter which way it is pointing. Rather useful for when I start lighting rooms and/or group shots.
at 11:07 AM

Whooeee! I woke up at 8:45 this morning to get up and out and shoot my buds (Boulder Rural Fire Department) burning down a house... because nobody loves fire like firefighters.

Here are a few picks. 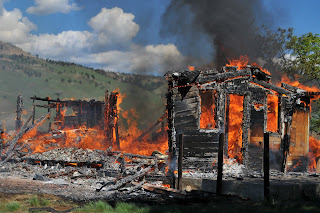 After the place was pretty much done. 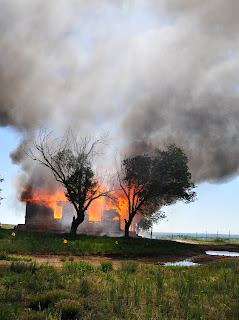 Just about the middle of the burn. I could feel the heat easily from where I was standing (100+ feet away) 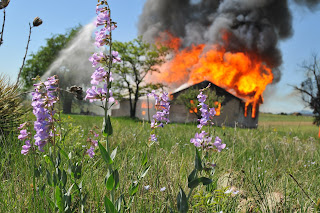 Pretty foreground... not so much in the background 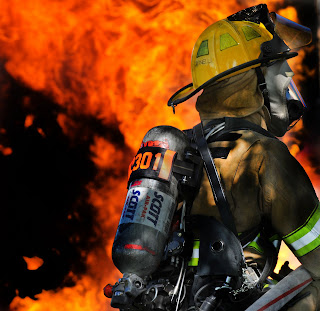 This is my favorite shot from the day. ^ 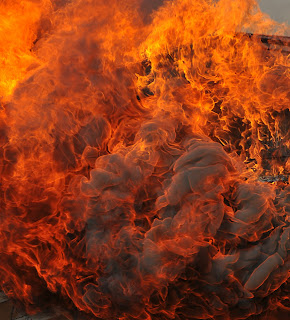 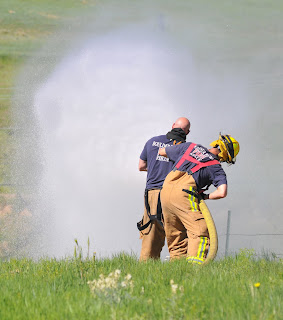 Venturing into the unknown

Finally, I've got a bit of a personal project in the works that actually involves taking pictures.

I really like the image in color, but here's a series in monochrome as well.

That was my day. I have a couple other concepts along the same line that I hope to be putting up sometime soon (this month).

Don't forget to backup your hard drive and calibrate your monitor!
at 6:50 PM

I haven't really shot anything worth showing off recently. Covered a graduation party, covered graduation, but none of the photos are fantastic. Mostly just good.

Here's a fun stop-motion movie of the cap-throwing at the Fairview High Graduation. I've been having trouble with the software I traditionally use (iMovie HD) to make these things, so I'm on the lookout of a better way to do it.

At the zoo: human exhibit 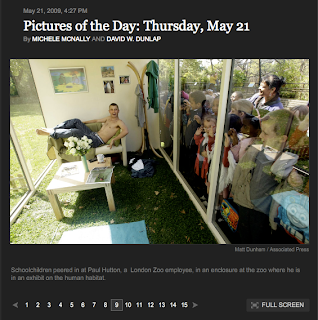 The London Zoo actually has a dude living in an enclosure for a few days, to help show the impact that humans have had on our world.

You just can't beat that!

Check out LENS blog here, and the Pictures of the Day here for more photos and links to stories
at 10:53 AM

Rather than pointing you to one of my own photographs, I will instead point you to The Statue of Liberty.

NY Times Photographer Fred. R. Conrad managed to get into the crown of the statue, and he shot a 360 degree full panorama. If you've always wanted to get up there but haven't been able to, for whatever reason, here's the general idea of what it is like to be inside Liberty's head.
http://www.nytimes.com/interactive/2009/05/20/nyregion/20090520-liberty-pano.html

He did it with a Canon 5D and a 15mm Fisheye. 11 exposures total, all stitched and merged in PS to get rid of the tripod and the photographer's legs.

I have several projects that are itching to be shot... I just have to get out, get models, and actually shoot them. More later!
at 11:22 AM 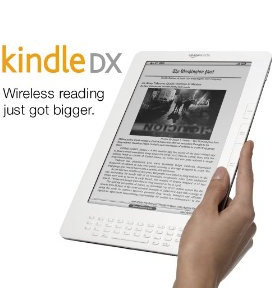 I could really go for one of these suckers. If they release it in color (like I hope they will) OR if they do a price-cut or come out with a new version before I go back to school in late August, I might HAVE to buy one. Fortunately for me, the promo video at the bottom of the page (linked above) does all the justification for me. It does books, blogs, magazines, newspapers, PDF's and textbooks! It has 3G wireless for FREE! You can read for days without recharging, and the screen was actually done intelligently (not backlit), so it "reads just like a printed page" with "e-ink" in 16 shades of grey.
Now, I know better than to purchase a first-generation anything (except the iPod Touch... because I just couldn't wait), but this is already the second or third generation of Kindle. Once I see a 9" screen at $350, or a color screen under $500, I will buy the darn thing and replace all the miserable college textbooks that I would otherwise be carrying around, with a sweet device just over 1/3" thick. Then (sadly for the printing industry), I don't have to buy each new book in a series and find space on my bookshelf (which I just cleared all my old books off of to make room for photography books). Instead, I can just download it for a measly $10.00 and it stores on the Kindle's 3.3gb flash drive.

Now, if you'll excuse me, I'll clean my drool off my keyboard and get back to being productive :-)
at 10:20 AM 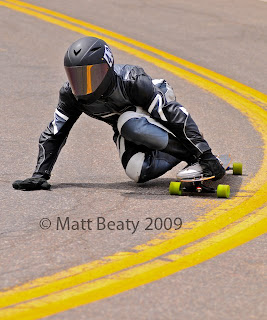 This is quickly becoming one of my favorite sports to shoot.
The Buffalo Bill Downhill race, held on Lookout Mountain in Golden, CO was sweet!
Ok, so technically I didn't get to see the actual race, which was held on Mother's Day. I did however, have the opportunity to shoot for about 30 minutes on the practice day, where the boarders spent the day figuring out the course, hauling ass into one-another and stacks of hay on the side of the course. 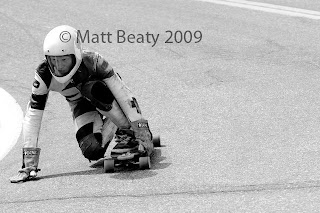 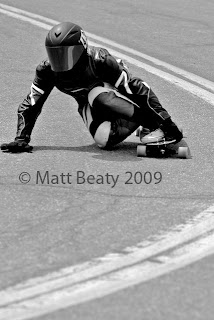 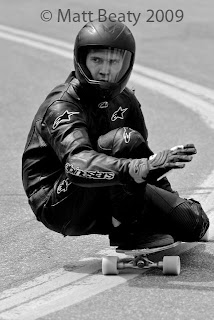 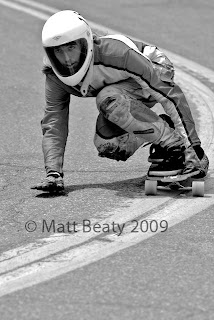 I was under the impression that these guys would be practicing for at least a couple hours after I showed up... but 30 min after I got my gear out, they were packing up. I got shots from two runs, from the exact same spot on the course. If I had shot the race, I would have done it from at least three different places, and I would have definitely spent some time on panning and blurring. As it is, I was at 150-200mm F4, ISO 100 and a miserably fast shutter speed. If I zoom into these shots, I can see the guys' eyelashes no problem... whether or not I like that, I'm not sure. Next time, I'll be doing some blurring.

I don't have many shoots planned in the near future, so the next month or so should be a bunch of personal work.

I'm also working on the "Masters of Photography" series over on my new WordPress blog (photographymasters.wordpress.com). It is essentially a self-assigned homework series to force me to look at the photographers and imagery of the past. If I don't think anybody will ever read it, I won't do it ('cause I'm a publicity whore these days), so I made a blog. The WordPress part is just to see what the differences are and it doubles as research for a client who wants to start a new blog (and have me do the pictures for it).

That's what I got! Make sure you're getting RSS feeds from both blogs!
at 2:03 PM

I started a new blog for my learning experience on the Masters of Photography. It can be found at
http://photographymasters.wordpress.com/

I went ahead and jumped right into things with a post about Edward Weston.

I'm going to keep this blog focused on my photography and personal life, while the photography masters blog will just be for this ongoing (Summer) project.
at 12:41 PM

I've been making lists obsessively this week.
The "To Do" application on my iPod Touch runs my life. 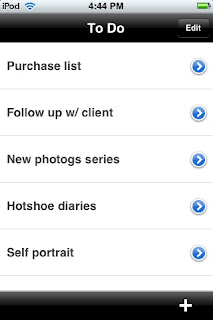 (Fun fact: make screenshots on the iPod Touch and iPhone by pressing the power button and front button at the same time. The screen should flash white and the screenshot will be added to the photos folder).

Another fun list came from Chase Jarvis, who posted today about 22 things photographers should do.

I took the photography legends that Chase suggested in the above list, combined with the list in Joe McNally's new book The Hotshoe Diaries, and I will be doing some research and writing something on each of the 23 photographers on that list. I'll start that series sometime before next week and I hope to do a new photographer every two days.
at 4:36 PM

I'm finally back at home in Boulder, CO and getting on top of things.

First, for your enjoyment, an ad I'll be running in the Royal Banner (FHS' student-run newspaper) 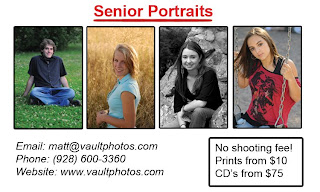 It is 5x3 and will run in color the last issue of the Royal Banner.
I'm taking suggestions and comments (although my prices are going to stay where they are for now)
at 12:22 PM

How often do YOU get to take pictures of 50+ people running around in their underwear? 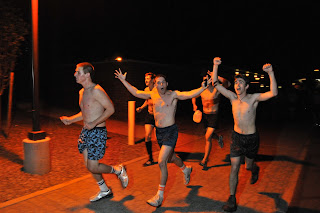 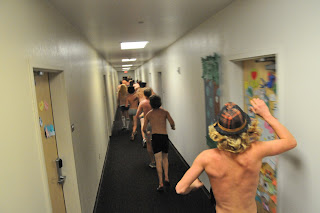 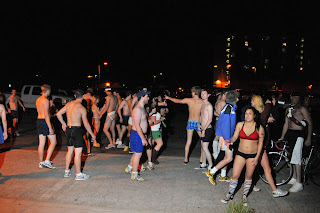 The above shots are all from the annual "Undie Run" at NAU that goes off just before Finals week. I never got a good count of how many people ran, but there were a lot.

The run apparently started at the Student Union, and progressed to do a few laps around north campus at which point it broke up into several smaller groups, some of which ransacked the Library, while others headed to downtown Flagstaff. One of these split-off groups managed to get into my dorm, where they proceeded to run down the halls screaming and banging on doors. (middle shot, above).
After all that running, they took a break outside the back of my building, took pictures of each other and basically loitered and gave my RHD a hard time (she tried to shoo them off, but they wouldn't hear of it).

The paper (sadly) is done printing for this year, so the only publicity any of my shots will get will come from this blog.

To get a feeling of how many people ran, check out this video posted by one of the RA's in my building who was on the third floor when they ran by as a cohesive group.

This week is finals week for me, so Blog Lite will probably continue until I am back in Colorado.
at 11:16 AM

I've been eyeing a nice little valley for a while now, located just off-campus. I finally got my butt motivated and went out Friday morning for a sunrise shoot.
The valley I was in didn't get the kind of light I wanted, but walking back to my room, I did find this 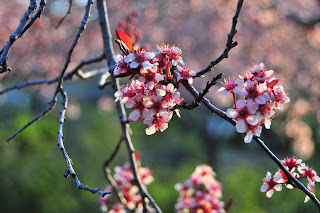 Gorgeous couple of trees, sunlight streaming in. I'll probably go back for a sunset at some point, although it looks like we're in for some clouds in the near future, so it may have to wait until next year.