I looked just about everywhere to see if I could find someone who did their own solar install on a Monaco Dynasty - and I didn't find much.

This post will show as much detail as I can muster for the solar upgrade/install that we put on our RV - going from 60w (on one trickle charging panel) to over 1100w on 5 panels, including our upgraded mounting hardware, where we ran the wires, how we installed the controller, and our final output numbers.

So. Let's get going. 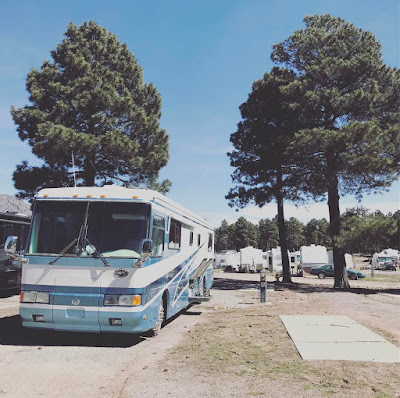 The RV is a 1999 Monaco Dynasty Princess. The bus is 40' long, 10' wide, and the roof seems *covered* in vents, fans, shrouds, and antennae. My first step was to do the layout and see if we could fit the 1060w kit from Northern Arizona Wind and Sun. The panels are about 40x65" - so I spent some time on the roof getting my bearings and measuring out where we could fit panels. The only way to fit all 4 panels was to remove the ancient satellite receiver from the forward section of the roof. We don't use it, and I'm not even sure if you *can* use that ancient technology on modern satellite connections. Consider it gone. 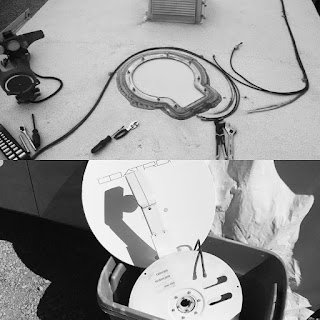 That space frees up enough room on the roof for the fourth panel.

Our RV has had the roof worked on a couple times during its life, but our next step was definitely to clean and re-seal the roof in preparation for mounting the panels. They say you should be looking at your roof once or twice a year - March/April is that time of year for us.
We ended up going for an acrylic re-sealer, as recommended by a few forums working on fiberglass trailers. It's actually marketed as a floor sealant, so it was *cheap* and easy to work with, as opposed to the material marketed as RV roof sealant, which is expensive and has to be rolled on with paint rollers.

We cleaned the roof with three passes of hand-cleaning and washing. After a thorough dry (and maybe a beer), we started on the re-sealing, which is 5-6 thin coats applied by hand with microfiber towels.
We knew it needed to be resealed because the chalky texture of raw and painted fiberglass was washing down all over the coach when it rained or snowed. The sealant provides a UV-resistant layer between the paint/fiberglass and the weather. 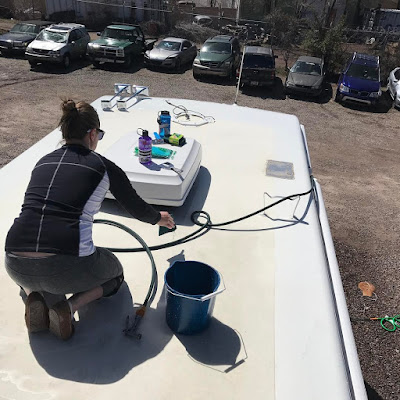 Cleaning. We used scotch-brite pads, magic erasers, microfiber cloths, soap, and water. There was also some scraping involved to remove sections of the old clear-coat that were flaking. 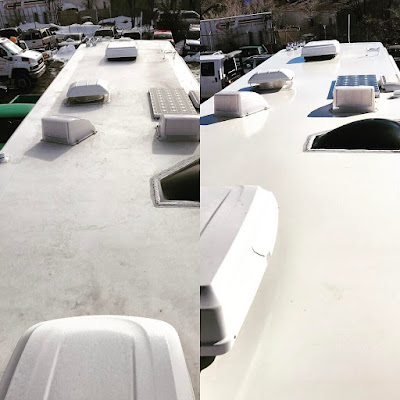 OK. Roof is clean and re-sealed. From there, it was time to pick up the panels. Immediately upon doing so, however, I knew I needed new mounting hardware. The stuff that comes with the panels is simply not designed for panels this large, on something that moves.

I'll admit, this stumped me for a while. I spent several fruitless hours wandering around Home Depot, looking at anything that looked like it could be used for mounting solar panels. After the better part of an afternoon, on my drive back to the bus, I was sitting stopped at a traffic light and noticed, (maybe for the first time in my life) the shape of the posts that the city mounts signs on. It looked perfect!
Back to the hardware store - this time to the local store just down the street - to ask if they had any U-Channel.

Sure enough. They had stainless steel U-channel in the form of 7'6" fence posts. I bought three, and asked to have them cut into 12" sections. 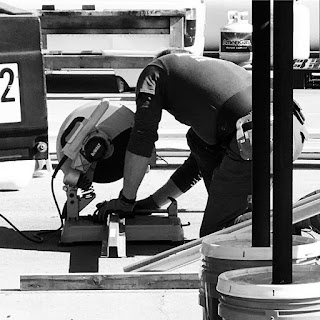 Once I had the hardware, everything started moving along pretty quick. I spent the next morning drilling holes in the U-channel to fit the pre-drilled holes on the solar panels. 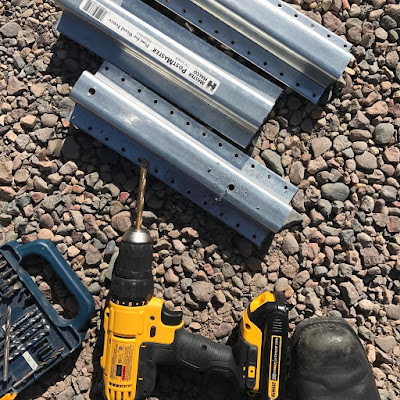 Yeah, I killed that drill bit drilling through all that steel.

Next step was to mount the feet to the panels (another trip to the store for washers/nuts/bolts) and apply 3m VHB tape to the feet. This tape is totally insane, and is designed to take the place of rivets, screws, and welds. Here's a quick video about 3m VHB. 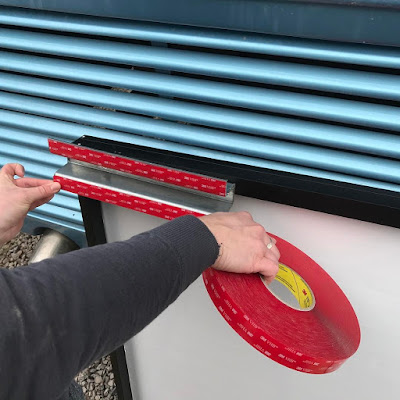 With the new mounting hardware, each panel weighs about 50 pounds. It took both Kristen and I, plus an extra ladder, about 30 minutes to get the panels onto to roof. We were sore the next day.
Once we got them up, we just had to clean the area on the roof where we planned to stick the panel. Cleaning with isopropyl alcohol ensures a nice clean surface for the adhesive to stick to. 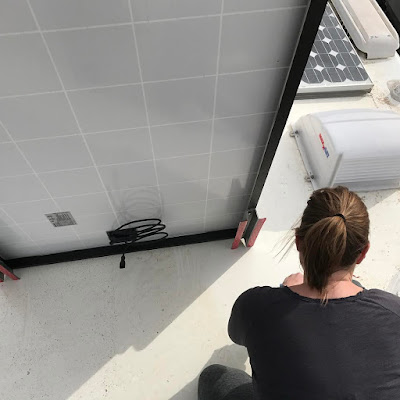 From there, we peeled the adhesive and stuck the panels down, making sure to orient the wiring exit from each panel in the correct place. 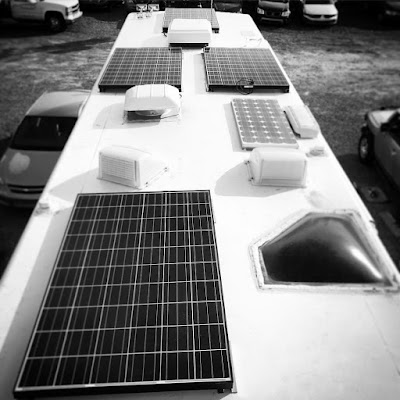 Panels mounted! (Time for another beer).

Next order of business was wiring. This is the part that stumps me - but with many emails to my buddy James at Northern Arizona Wind and Sun (they are great, I'm not being paid by them to write this, they just have great equipment and great customer service) I got the wiring figured out. 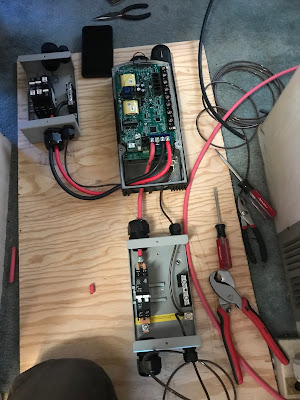 From the solar panels, we combined 8 total wires (One PV+ and PV- for each panel) into 4.
2 PV +
2 PV -
Those 4 wires run through the roof and down into the controller bay (my wife's closet).
They connect directly to the box on the top left of this photo. Each PV+ wire gets a 30amp breaker. Those two are then combined and run into a 60amp breaker.

Confusing you at all? It definitely confused the hell out of me. I spent hours figuring out how to get the wiring runs as short as possible (longer wire means you need to use thicker gauge wire, which is more expensive and harder to deal with) in order to avoid voltage loss. When in doubt, just like with my mounting hardware, I went for overkill. The wire that goes directly to the batteries is 2 gauge for a 6' distance, moving up to 80amps 12-15v DC. That amounts to a 1% loss. Pretty friggin good.

Caveat: I am no expert. My dad came down and helped me wrap me head around the wiring, as well as muscle things around and make the installation look as clean as possible.

To make the holes (ahhhh!) We used a 1" spade bit to go through the roof above the closet as well as through the floor. We ran 3/4" flexible conduit from the hole in the roof to the controller, then from the floor all the way to the batteries. The 3/4 conduit fits *perfectly* in a 1" hole. We used a hoseclamp to keep the conduit where it belonged while we muscled the wires down into the coach. Then we sealed the conduit, and then taped (and sealed) the black box you see below on top of the hole. That ain't gonna leak. 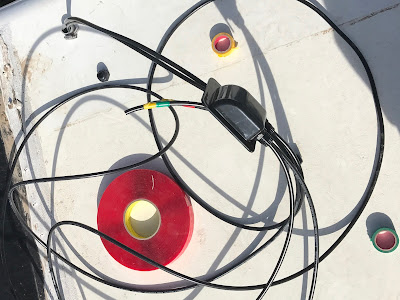 (The weird tape colors lets me track which panels are wired together, and which breaker is tied to which panels. Each panel was given a color. The wire you see here is the positive wire from the yellow and green panels.)

The original outline for how I was going to mount the breakers and the controller is here - in my wife's closet. 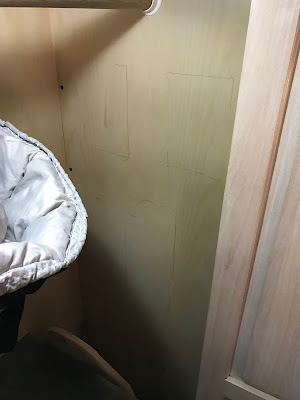 Here's how it ended up looking. I mounted everything to a piece of 3/4" plywood so I could do as much of the wiring as possible before I stuck it all in this impossible-to-access closet. Here, you can see the conduit straight to the first breaker. 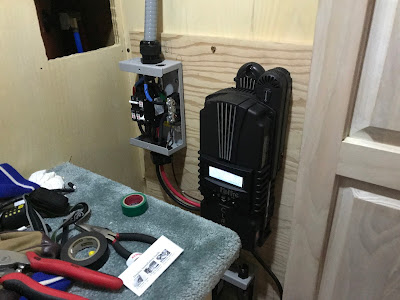 Why did I put all this stuff in a closet? Well, it's the closest place to the battery bank I could get, while still keeping all these expensive electronics out of the dust, rain, etc. Most people have their battery bank in an intelligent place, like a basement compartment. Ours is located directly behind the REAR TIRES! I'll never know who thought that was a great idea, but it makes them pretty much impossible to keep clean, since the enclosure has to be vented (flooded lead/acid batteries) and it is right behind the tires.

The only photo I forgot to take is the wiring at the battery bank. We installed a shunt and something called a Whizbang Jr. to act as a gauge and show how exactly how much we have going in/out of the batteries at any time. 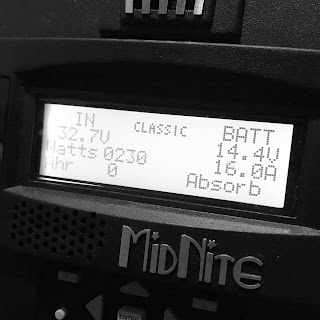 Our battery bank is 500ah of lead-acid flooded golf cart batteries, which means we get 225ah of usable battery (you're only supposed to discharge lead-acid batteries to 50%).
This system is designed to get us 225ah into the batteries every day, including during the winter.