Ok, so there's really nothing slimy about this post...
What the title really should be is "Ridiculous, yet useful," but that doesn't have anywhere near the same ring.

What's ridiculous you ask? My photo instructor: Professor Eugene Balzer. He is shown below shooting a demo portrait with a Canon 5d Mk II... 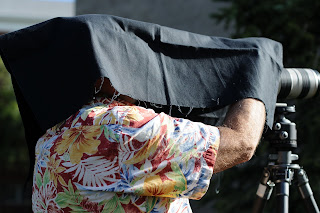 Rather than using a Hoodman Loupe (like the fancy pants photographers) or shading his screen with his hand like the rest of us, he pulls out a monster sheet of fabric leftover from his old view cameras and goes to town on his 3" LCD.

I admit it, I laughed at him along with the rest of the class... but thinking about it, it probably works really well.

The class I'm in is PHO285: intermediate photography. In the average 75 minute class, I learn maybe one useful thing about photography. I don't meant to sound all high and mighty, I've just taught myself a lot of this stuff already. That's the beauty of the Internet; becoming a self taught photographer, at least as far as the basics, doesn't take too long if you're determined to learn.

I'll admit, the one thing I learn each day is usually something I wouldn't get from any other photographer, which is why I'm taking these classes in a university to begin with.

That's what I got for now. I'm working on making a couple shoots happen, but if they don't happen in the next couple days they will probably have to go on the back burner for a while, as I'll be shooting lots of sports from the 17th-22nd. If I get anything really fun from sports, I'll be sure to post here for the world to see. :-)
at 10:33 AM