Get in my way: Soccer

This post is the second in a series about people who get in my way. It's my outlet to vent.
Today's subject: Media Nazis.
No, they don't have swastikas and they dont march in a supremely ridiculous fashion.

They do, however, discriminate against a group of people with extreme prejudice. Sometimes it seems like given the opportunity, they would do away with the media, the spectators and pretty much everyone else. 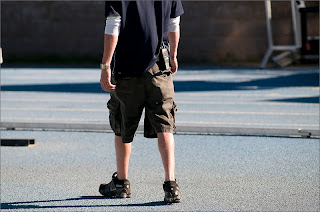 Ok, ok, they aren't really that bad. I know they're just doing their jobs and all, like I'm trying to do mine. I honestly don't mind until The Confrontation occurs. Invariably, one of the media nazis will impede me in doing my job. I'm one step too close to the field and suddenly I'm accosted by some self-important rule-enforcing guy in a "uniform" who informs me that he needs me (oh baby) to step back behind the line.

Why? "For safety reasons." Puh-lease. They're freaking women's soccer players for crying out loud. They aren't going to hurt me, and chances are really quite slim that I'm going to go crazy on them. Besides, with my monopod, I could probably beat a soccer player to death from behind the media line, while she stood on the field. I wont - I promise. But with the way they make monopods these days, I probably could.

Basically, these rules are full of shit. I'm calling them out on it. During football it makes sense. They're big guys and they would crush me. I accept that. But soccer? Really? Honestly?

I hereby warn the media nazis out there: I will abide by your ridiculous rules because I have no choice. But when you accost me, you're gonna get photographed. I think that's a fair deal.

Especially when you consider the kind of shots that I can get when I'm within a reasonable distance of the field. 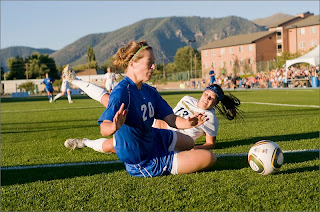 Have a great Weekend!