Hello and welcome to a wonderful Wednesday!

I spent a couple hours yesterday updating my portfolios online at www.vaultphotos.com, adding new photos, getting rid of some of the old crappy ones, and doing some coding to make things a little prettier. 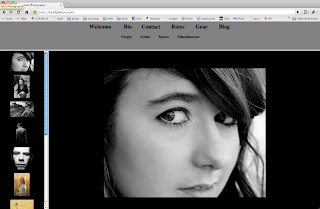 This first photo is my favorite portrait from 2009.

In preparing my site, I tried to keep in mind the things that Zack Arias has been spouting on his portfolio-reviews. Things like having a flow to the portfolio. For instance, my "people" portfolio starts with black and white, goes to images with oranges and yellows, then to greens, and then up to purple and red. The color transition makes it easy on the viewer and makes the images more cohesive as a series.

Things like having my portfolios easy to access, simple, and showing what I'm good at (which is why people come first) have been there all along, though I tried to keep them smaller this time around, with fewer images in each series. Editing is hard.

Oddly enough, in doing this twice-annual update, I became disenchanted with my browser of choice over the last year. For all of yesterday, Firefox refused to re-load the page I was working on. Oh sure, it would refresh every time I told it to, but it still showed the pictures and the wrong left-frame in my portrait series. I got annoyed and switched to Google Chrome, from which I am currently writing, where so far I have had no issues. (to be fair Safari also correctly displayed everything, though to be clear I still hate Safari).

With the switch to Google's browser, I have moved much of my computing to services provided (free!) by Google except my Operating System, which Apple has managed to keep relatively bug-free (the last update fixed my spaces-with-multiple-monitors issue). I am not loyal to any one brand just because of its name, and neither should you. If an alternative comes up with a good way to do something (especially if Google makes it :-) then give it a try!

So far, Chrome has been snappier than Firefox, and absolutely error free. My website displays like I tell it to and I like it that way. I'll stick with Chrome until it does something I don't like... which will hopefully be a while. Though, surprisingly enough, I don't have the search bar in the upper-right corner... curious.

I'm off. 1 final today, then helping my buddies move. Thursday is two photo finals (one of which is showing off my glorious website) and then an epic NERF battle.
Have a great day!
at 8:59 AM