Man, I'm Sure Happy Its Thursday!

I've spent the last couple days messing around with various RSS readers, ever since Google failed me by refusing to let me unsubscribe from a couple feeds. I tried a few different readers, and so far the one I like the best is called NetNewsWire2. It's software, which means you can't just access it anywhere you want (like you can with all of Google's services). Instead, you have to download and install it on your computer.

I did that, and so far have been impressed. It even shows the number of unread posts (here, 13). 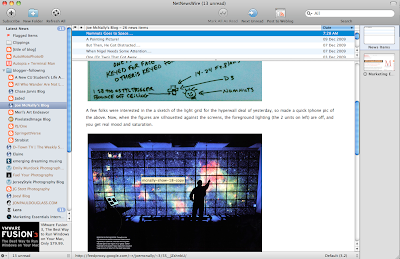 Above is a screenshot of what it all looks like (the feed shown is Joe McNally's blog).
On the left you have a list of blogs and an ad (cause the software is free). On the right you have a list of the windows open (the software has a built-in browser, so when you click a feed, it opens it in its own window). Middle-top is the list of recent posts, middle-bottom is the post you are currently viewing.

The best part: it syncs with Google reader, which syncs with Blogger. So, I didn't have to do anything to set it up. I gave it my Google access credentials, it loaded my blogroll. Piece of cake. Of course, there were still the two blogs that I've been trying to unsubscribe from on the original Google Reader. I unsubscribed from them in the software and haven't seen them since. Hallelujah!

Today is my last day in Flagstaff for a while. I'll be packing up and heading out mid-morning tomorrow, driving 12 hours to get home, and then waking up early to participate in the Help Portrait event in Boulder. We've got a bunch of volunteers and (hopefully) a whole lot of subjects to photograph. I'll probably be working Digital Asset Management with a full-time pro who specializes in it. I'm psyched.

I'll blog after the event to let you know how it went! Until then, Stay Happy Its Thursday!
at 10:21 AM