UPDATE: Turns out that both pictures posted here were published in the Boulder paper "The Camera" on August 17. These were my first pictures that actually made print for that paper, although several of my pictures have made the online-versions of stories.

Probably my last opportunity to shoot a fire came up today, so quite naturally I took it.
Fire was between 79th st. and highway 287 south of Lookout rd.
I know nothing about how it started, but once the wind kicked in, the fire burned pretty fast. Several different agencies responded, BRFD (my employer for 3 more days) was first, so after recieving the call from my dad, I busted out there and took a few pictures. I saw several photogs come out, one had a real big lens, and I knew they would have better longer lenses than me, so I hustled out into the middle of the field with my wide angle. I was not anywhere near close enough, but shooting these damn fires always entails a lot of walking and I wanted to give the fire a lot of room, because the cross winds could not make up their mind which way to blow. first at me, then away from me.
I submitted 6 photos to the Camera, we'll see. The best of which is: 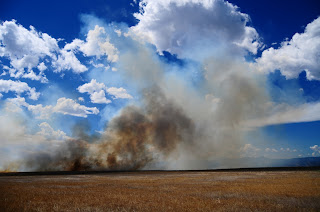 What I realled needed was a brush truck or a tanker about 20 feet from me on the right... but they were all busy fighting the fire.
I did get one shot with the tanker in it: 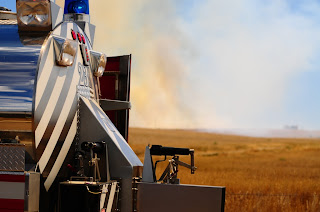 The fire was really far away, so I had to put on the tele and stand far enough back to make the fire seem a little closer.
Some cool motorcycle pictures later!
-Matt
at 1:16 PM