A second afternoon with the WRX

I took the 2011 WRX out again from the dealership on Friday, this time for some interior work. 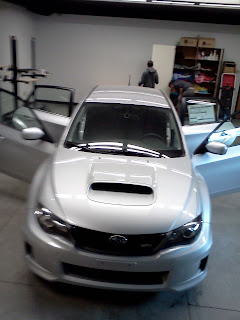 I'm not generally a fan of interior photography, but overall it wasn't too much of a painful experience. I had a bunch of lights at my disposal, and a large studio. It turns out that one of the photo profs at NAU used to photograph cars professionally, so I asked him to come down and help me figure things out.

We used two hot-lights to light the entire of the cockpit. Can anyone guess where they were? 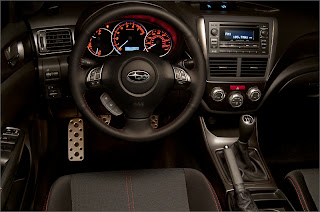 I spent 2 hours on location and only took 38 pictures in that time. Most the time was spent cleaning the interior, arranging lighting, and generally being super-nit-picky about all the details. Very much a foreign concept to me, as I tend to be a "big picture" person.
Another 1.5 hours in post production and I got the image above, which started with just one exposure. Unsurprisingly, there are quite a few layers for individual details like the gauges, clock, wheel, vents, etc.
Assuming the snow stays out of the way in Flagstaff, I plan on photographing this car one more time for motion. We'll get it out on the highway and get some nice blur in the wheels.
This week I'm finishing up a shoot for the East Coast Deli and Grill. When that is all said and done, I'll post some of those and talk a bit about how I did my first food photography assignment.
at 5:58 PM