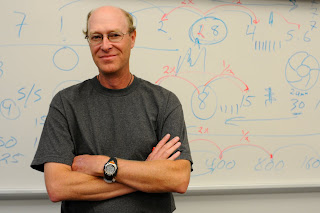 This is Russ Gilbert - the lab supervisor at NAU's photo program.

He isn't a photo professor, but he teaches better than the people with fancy degrees.

For those of you who don't know, I'm enrolled in the Photography program at Northern Arizona University. I've been shooting for five years and as such I am mostly self-taught. Of course, by self-taught I mean I didn't go to school for the majority of my photo education. I have David duChemin, David Hobby, Joe McNally, Scott Kelby, Ken Rockwell, and the Internet at large to thank for the majority of my photo education.

That being said - I took a class last night from Jess Vogelsang. Jess is (so far) the only person in the photography program at NAU that has anything to teach me. It isn't that I think I'm above all the other classes - I go and I learn the odd tidbit - its just that the other professors are, well, professors. They aren't photographers anymore. 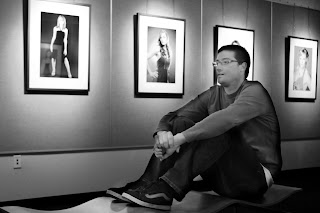 This is Jess with some of his work in a gallery on campus.

I took this 1.5 years ago on my first portrait assignment for The Lumberjack.

Notice the crude Photoshop - that's why I'm taking his class.

Jess is a full time working photographer. The man lives and breathes photography and post production and his clients know it. The fact that he is NOT a full-time professor is what makes him a great teacher; he is still actively involved in the industry! The other professors I've had are all mid fifties or older. They were raised on film, which is mostly dead now. Sure, they can operate a digital camera, but they haven't worked their entire careers in the digital era and they haven't cared enough to really learn the digital side.

I am really looking forward to this Advanced Digital Workflow class - not only because of the Photoshop tips and tricks, but because we are going to focus heavily on using modern strobe lighting. No hotlights. No Alienbees. We're going to use profoto gear all the way through and we are going to learn it inside and out.

Light is the photographer's paint brush. Without light, even with the fanciest camera gear, you get nothing, so I am super excited.

Readers: have any of you had a particularly good photography teacher? Someone who was excited about photography and who really cared about you as a student? Someone who wanted you to succeed, even though he or she knew you would be competing with them?
at 10:07 AM