For those of you who don't know, I shoot mainly using a Nikon D300s body. Attached to it at all times is a vertical grip/battery pack.

Both the en-el4a and the AA batteries offer a frame-rate boost, which is really helpful when shooting sports. It was super easy for me to tell the difference on the old D300 body, because the AAs took me from 6fps to 8fps. The D300s shoots at 7fps regularly, so i'm only getting 1 extra frame per second using AAs. Still, that one frame makes a difference. 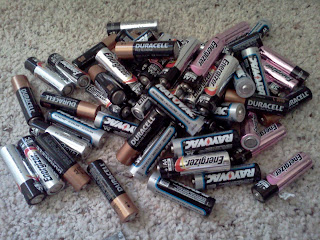 The photo above is the AA batteries I've gone through in the last 5 months. Approximately 68 in total. That's a lot of batteries. In fact, it's over $50 worth of batteries, since I usually find myself (or my boss, who generously donates about half my battery consumption) buying name-brand power cells.
I should be using rechargeable cells. I know. I own more than enough to power the camera, while having a spare set on the side. The problem is  - the camera refuses to acknowledge that the batteries are there. Even after fully charging them, the camera sees them for about 400 frames, and then thinks they're empty. I know the problem isn't the batteries, because I use them in everything from my scanner to my SB600 speedlight, and they work great for weeks!
With a regular set of alkaline AAs, I generally get 2000+ frames before the camera switches to the internal en-el3 battery. As such, I use alkaline disposable batteries pretty much full time. At this rate, I'm using well over 120 batteries a year. It's costly and it's a pain in my arse; I feel bad about throwing that many batteries into the landfill, so I have to make special trips to have them recycled.
To be fair, I haven't tried the rechargeable batteries with the D300s body yet, so I'll try to do that in the near future. Maybe I'll get lucky and that issue has been fixed.

I'm busy today with client meetings, which hopefully means I have some work coming my way.