First off, if you like, The Directory of marketing at Lexar, talking about the advantages of high-speed memory cards. Not the best video in the world - but it gets the point across.

In the olden days, photographers used something called film as a medium to record their photographs. While a few people still do use film, many have moved to digital.

Instead of film, digital photography requires memory cards.
There are a whole host of types and sizes of memory cards - each with its own unique advantages.

The two main types used in digital cameras are Compact Flash (CF) and Secure Digital (SD). Most "pro" or "prosumer" cameras are chambered for CF cards, though some (like the Nikon D300s) can accept both CF and SD.

Consequently, CF cards tend to be expensive. I suppose the theory is that if you can afford to spend $5,000 on a camera, you can probably throw down $10 for a memory card or two.

Interestingly enough, many people don't understand that with memory cards, you really do get what you pay for. The two important aspects of a memory card are its size in gigabytes and its speed, in Mb/s.

I use LEXAR 4gb, 300x cards. That means that each of my memory cards holds 4 gigabytes of photos and that the card has relatively high read/write speeds of 45MB/sec. These cards generally run $75 for 4gb which is just about middle of the line for Compact Flash. If you want the superfast high capacity cards, you can get 32gb 600x cards that read/write at 90MB/sec. Direct from Lexar, that will run you $500 per card. Ouch.

On the other end of the spectrum, you can also get an 8gb CF card for $20 - so why would you ever pay more? It depends on your need for speed! Inexpensive cards are slow. If using a 300x card is like using a water faucet - pouring your photos into your computer, these no-name cards can be likened to dripping molasses. You take a picture and your camera takes forever to load it to the card. At the end of the day, budget at least 10 minutes for your 8gb card to download to your computer. By comparison, a full 300x card takes about two minutes to load via Firewire 800. 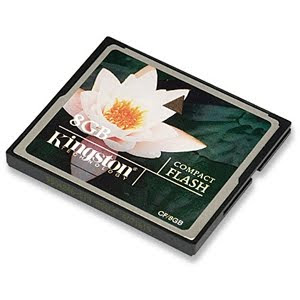 Does everyone need high speed expensive cards? No way! If you take pictures one at a time (no motor drive) and you don't mind waiting for your card to download to your computer - by all means go with the cheap option!

I shoot sports. I shoot fast. I find that even my 300x cards bog me down during heavy sports shooting. I'm limited to a 12 frame buffer which takes about two seconds to fill at my highest frame rate. I then wait two seconds, and continue shooting. At the end of the day, I'm on deadline. The faster I get my photos uploaded, the faster the news release or the newspaper or whatever can get published.

Compact Flash are not the only options for high-end cameras though. SD cards are abundant, and cheaper! Micro SD cards, with an adapter, can also be used in many cameras. The big downside of that - SD cards aren't as fast. Even Lexar's high-end SD cards top out at 133x, about 20MB/sec. You can get them in sizes up to 32gb, but the slow read/write time means you won't be capturing action like those using CF cards. 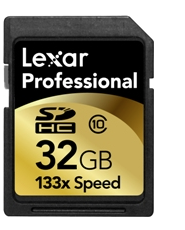 Of course, your memory card isn't the only possible bottleneck at the end of the day - you need a card reader to interface with your computer and the card. It acts as a middleman, and is the biggest cause of slow downloads that I know of. Even the middle-of-the-road memory cards won't perform to their full potential if a slow card reader is being used. 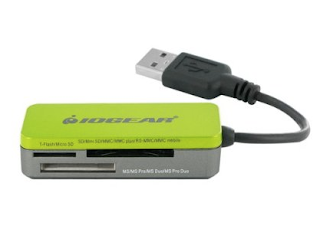 Mac users have two options for card readers. Firewire or USB 2.0. Firewire is faster and consequently more expensive. Most Windows users don't have Firewire ports, so USB 2.0 is your limit. I recommend staying away from the "all in one" or "32 in 1" card readers. They are meant to be convenient, not fast. I use a Lexar Firewire 800 Compact Flash card reader. It only does one card, but it does it expediently. On the other hand, I also bought a $15 all in one card reader from Target (above) that lives in my backpack as a backup. It takes about 5 times longer than my Firewire reader to transfer data from the same card. Again, you get what you pay for, and you're paying for speed.

The most important thing to know is how much you really need speed either at the camera, or on the computer at the end of the shoot. If it isn't a big deal, there's nothing wrong with saving some money on memory cards and buying the cheap stuff. If you like your memory cards fast, reliable, fast and did I say fast - go with 300x or faster on the memory card, and the card reader.

Comments/questions are always appreciated!
at 10:31 AM