I shot the first Track and Field invite of the season at NAU yesterday afternoon.

A bunch of smelly, sweaty college students, inside a huge indoor dome. The recipe for fun.
I am shooting 800 speed fujifilm. At f/2.8 I get 1/125 second (1/3 stop underexposed). Not exactly optimal when the sprinters can do 60 meters in just a few seconds.
Somehow, miraculously, I still managed to get a few decent shots. When I saw the CD this morning, I honestly couldn't believe how many were acceptable.
My favorite shot:

Warning! The shot below contains an athlete vomiting! 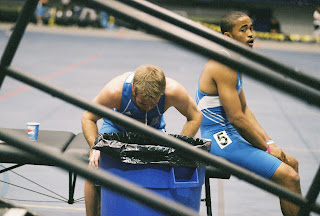 I forget which university this guy is from, but man he was having a bad afternoon. Right after he finished the men's 3000 meter run, he came over, grabbed the trash can, and started going at it. Fortunately for him (and those of us around him) there was apparently little left in his stomach.

I see this fairly frequently. Track and Cross Country athletes push and push and push their bodies. Makes for fun pictures, although I'm sure they don't enjoy it nearly as much as I do. On the bright side, he was so absorbed in his activity he didn't notice me taking pictures.