The Power of MUSIC

I'm straying a bit from my usual topic today... Hope you don't mind.

Music has always been a powerful part of my life. I started singing in 5th grade - a soprano along with all the girls and most of the other boys in the mandatory choir/music lessons. I continued to sing in choir throughout middle school and most of high school. I was the classic freakshow choir kid depicted by the montage in the TV show GLEE. You name it, I wore it. Jumpsuits, trenchcoats, capes, leopard print, everything. I dyed my hair a variety of colors. I had acne like you would not believe.

None of that really allowed me to express myself the way music did, and still does. I sang in choirs ranging in size from 7 people (if you can call that a choir) to over 100 people. It was tough, but I don't regret one minute of it.

Eventually I stopped singing soprano (because my director wouldn't let me anymore) and moved to the next-best thing - Tenor 1. I actually chose my high school based solely on the fact that it had the best choirs I had ever heard. Fairview High School still has the best high school choirs I've ever heard.

Music still holds an extreme power over me - nothing gets me to tear up like a well-performed song. I don't even care about the lyrics most of the time, all I want to hear is that the singer has *heart*.

As such, the show Glee was an absolute blast for me. Sure, I spent a fair amount of time trying not to sob all over myself and my companions, but it also took me back and made me realize that I learned a lot of the same lessons that the characters on the show did. I learned many of them the hard way, and I did it with music.

At the time, I don't think I realized what I was learning. I was just singing because it was fun, because it was tough, and because singers are truly some of the most amazing people I have ever known. Thinking back though, I realize I have learned a lot from music and the people involved with it. Middle and high school are tough on kids, regardless of their upbringing or social class. 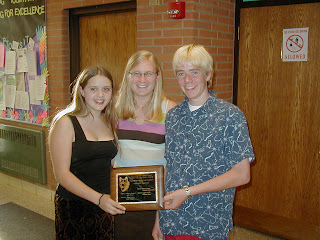 Me with my choir teacher, Ms. Keeler and the ever-talented singer and bassist, Nalani - 8th Grade
There came a time, however, when I had to choose between my two passions. There simply was not enough time in the day for me to be in the three choirs I wanted to be in, while still taking photo classes and shooting for the yearbook and the newspaper. I chose photography over music... but it was a tough choice and I spent the vast majority of my junior year battling back and forth.

Eventually though, a choice had to be made. I don't regret choosing photography; I'm a better photographer than I ever was as a vocalist. I did OK as part of a group, but I was never much of a soloist.

The point of this long-winded and reminiscent rant?

I honestly don't know...  but this being my blog, I can write whatever I want. There doesn't have to be a point to it.

But I guess if I dig a little deeper, what I'm trying to say is:

To anyone and everyone who encouraged me to continue with either music or photography. To all the choir teachers I had, to the photo teacher (singular) I had, to my parents and friends. To anyone who continued on and still makes amazing music.