Much like David duChemin, I'm not a huge fan of gear-centric rants that exclude the most important part of photography: the photographer.

Despite that, I have recently acquired a couple new tools and I'd like to share what I think about them.

Keep in mind that while these tools enable us to do certain things, and limit us from doing others, they are still just tools - things we use to make our vision become a reality. 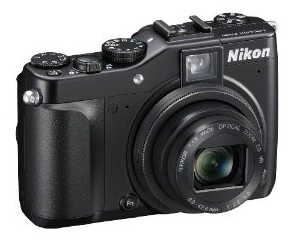 Whew. We survived the tech specs. Now onto the real meaningful stuff.

I've wanted a camera like this for ages. Small, portable, but that still allowed me some kind of control over what I was shooting. I asked for the p7000 for Christmas, having seen it go on sale for at Amazon ($229). I didn't expect anything - it's an expensive gift and I only discovered the sale last-minute. Despite that, my amazing parents managed to get it under the tree for me on Christmas morning.

I've spent the last few days putting the camera through its paces. Testing and trying and learning where I can. It has been frustrating. Going from a camera I know intimately well to using a totally different (and MUCH slower) system is hard. I am by no means an expert, but I've learned a few things that I think are worth sharing.

The main use I have for this camera is: everyday carry. I'll keep it in my man-purse with my extra computer cables, my emergency Snickers bar, water bottle and book. The things I like to have with me, but that I can't or won't stuff in my pockets.

The awesome extra-special use for this camera, however, is studio/portrait work.
The hot-shoe on the P7000 will work with Pocketwizards, cybersyncs and most likely other brands of wireless triggers. This means that I can set off big powerful studio lights without carrying around my monster DSLR.
This camera is ideal for the photography student who is required to bring their camera to class every day, but who lives off campus and doesn't want to carry around the 35lb backpack of bodies and lenses. It's ideal for an impromptu portrait session either on location or in the studio, where you have access to speedlights or studio strobes, but you want to stay mobile.

For instance,
Yesterday afternoon I went with my brother Mark and his buddy Zach on a hike. Up a mountain. I decided that it might be fun to take my Einstein 640 along for the ride so I could use some big-strobe at the top of the hike. The strobe and the Vagabond Mini weigh a fair amount, but they're manageable. If I had wanted to bring up My D300s and the same range of lenses as the P7000, I would have been carrying another 15 or 20 pounds on top of the strobe equipment.
Instead, I snagged the P7000 and my CyberSync transmitter. Under 3 pounds and it fits in my cargo pockets for the hike.

Let's look at some pictures. 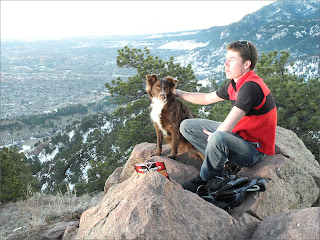 At F/8, ISO 100, 1/250 second. This image lacks the underexposure I need to really make it dramatic. Generally, I like to underexpose the ambient light by about 2/3 stop in order to make my subject matter really pop. With the aperture limitations on this camera, I was worried that it would have been impossible.

Then I discovered the best feature about the P7000. It does not have a focal plane shutter. It does not care what shutter speed you use with a flash. The following image was taken at F/8, ISO 100, 1/1000 second. Flash goes top to bottom, no big deal. This is amazing! I went up to 1/2000 sec. Above that, it quit syncing properly with the Einstein - and at half power, that was probably a function of the flash duration not being short enough for the camera. 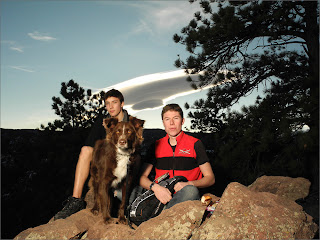 This opens up a whole new area of possibilities. Working with flash at 1/2000 second shutter is something no DSLR I know of an do. They generally max out at 1/320 or sometimes 1/500.

To be fair, a large part of this working is probably due to the fact that the Einstein 640 has incredibly short flash durations. The whole draw of this technology is that the flash pop is MUCH faster than other strobes. Still - the combination of the Einstein and an electronic shutter is powerful. 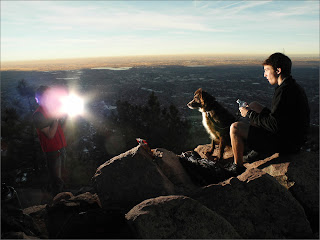 Above is a quick Behind the Scenes shot of my brother Mark holding the Einstein, while Zach and Mocha (the dog) sit on the peak of Mt. Sunitas. 1/1000 sec. Overlooking Boulder. 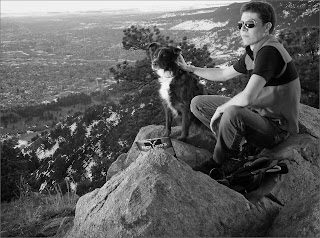 Here, I chose to brighten up the ambient a little bit. Something like 1/640 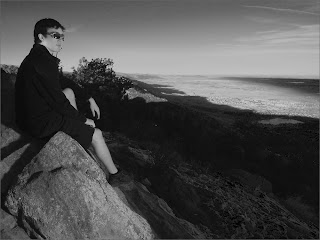 This is all the way down to 1/400, but we were quickly losing daylight at this point. The shadow on the right side of the frame is that cast by the Rocky Mountains.

The ability of a P&S camera to fire big strobes is what makes this camera worth having. Anything else, like impossibly short shutter speeds, is just a bonus.

To be fair, the P7000 suffers from the same shortcomings as nearly all P&S cameras. It is SLOW to do what you ask of it, it has a habit of resetting all the settings every time it gets turned off, the zoom is unbearably slow to respond, it's a variable aperture, and the dials and menus are different from what I'm used to. Did I mention that it is SLOW? Because it is. I bought a class 10 SD card, hoping it would speed up write times from the camera to the card. No dice. Still takes a full second to write the picture to the card, then another half second for the camera to get its life in order before you can ask it to shoot again. A second and a half? That doesn't seem so bad - but when you're used to 8 frames per second with a strobe at half power, a 1.5 second wait seems like eternity.

On the bright side, it has a rangefinder - so if you don't feel like looking at the screen, or you can't see it in bright sunlight (not much of an issue), you can look through the minuscule window above the screen and get a basic idea of what your image will look like. The AF light is conveniently displayed right next to the rangefinder, so you can see when the camera is focusing and when it thinks it has focus lock. It does fairly well focusing, aside from the fact that it takes forever.

Overall, I am very much enjoying my new tool. The fact that I have it with my everywhere and that it is *much* higher resolution than my phone means that I can make quality (printable) photographs of anything/everything around me, whenever my muse strikes.

That's all for now! Questions? Comments? Concerns? Let me know below!
at 11:13 AM