I found out the other day that it is possible to change/customize the background on one's own twitter page. Looking around I saw that many of them were LAME, so I built my own in Photoshop. 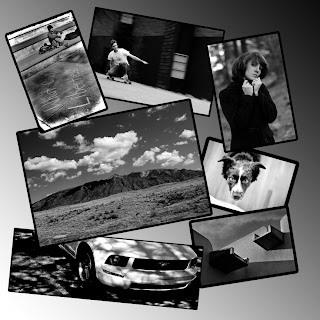 Just because I can.
I didn't quite know how big to make it, so I guessed big. It turns out you can't see the vast majority of the photos, so I'll probably end up changing/remaking it. Check it out [LINK]

Also, for those of you who don't know what Twitter is, check out a blog post by a bud my mine, Laura Chernikoff where she explains the role of Twitter and other micro-blogging services as she sees them. It's an interesting read. At first I was annoyed by Twitter and found absolutely no use for it, but upon using it I've realized that it actually does have its purposes. Mainly, as Laura points out in her post, the ability to connect with celebrities and see what they are up to. I am far less interested in people like Tom Cruise or Ashton Kutcher than I am in people like Chase Jarvis, David DuChemin, Scott Bourne (a new find via Twitter), and photographers in general.